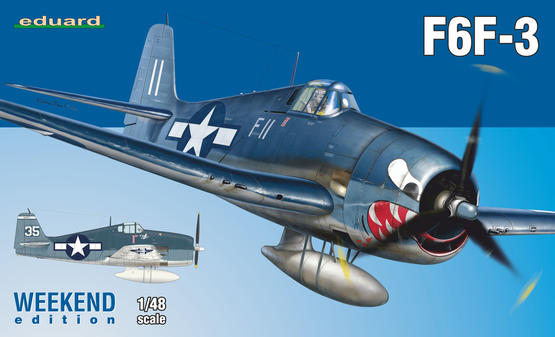 The most striking markings applied to the Hellcat were applied to the aircraft of VF-27 on the USS Princeton (CVL-23). The sharkmouth and bloodshot eyes seared themselves into the memory of more than one Japanese pilot. The sharkmouth and eyes were applied to all the Hellcats serving with VF-27 by one of its pilots, Robert Burnell, and with them, wreaked havoc everywhere they operated in the Pacific. Over this span, they accounted for some two hundred downed enemy aircraft. The end of combat for VF-27 came about on October 24th, 1944, when the Princeton suffered a Japanese bomb hit. A major fire ensued, and the Princeton was finally sunk using torpedoes launched from friendly ships. Only a few aircraft that were in the air at the time landed on the USS Essex. One of them was this Hellcat, with the uncommon ‘F11’ marking and with two kill marks in the form of small Japanese flags below the cockpit.

USS Essex (CV-9) participated with Task Force 58 in the Battle of Leyte Gulf that took place on October 24 – 25, 1944 in the Philippines. VF-15 Hellcats were launched from Essex as part of the second wave of U.S. aircraft that attacked the Japanese battleship Musashi and helped to sink her on October 24th. Arthur Singer, Jr. achieved ace status on September 12th, 1944, downing a J2M Jack fighter over Cebu. He was awarded the Distinguished Flying Cross for his extraordinary achievements while participating in aerial combat on October 25th, 1944. Singer´s final tally was ten victories.

Advantageous set of Photo-eched and Mask sets.
For kit: EDUARD

Photo-etched accessories.
For kit: EDUARD
Write Product Review
You have to be logged in to write a review. No review available for this item.
Top of page
You just added a product to the cart.