News September 2021 products were just added into our online Store. See the complete list under this link.

Back to Overview
Previous Product Product 35 / 49 Next Product
You are here: / Eduard / Plastic kits / Profipack / Aircraft / 1/48 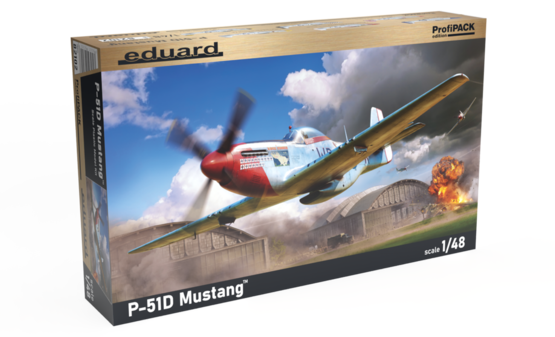 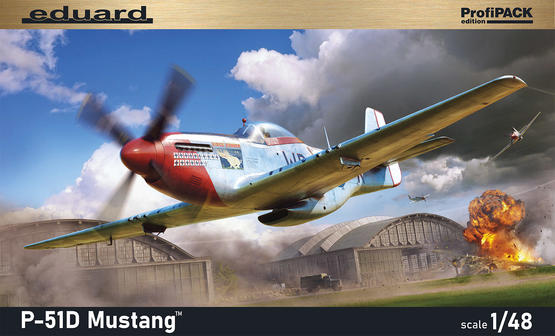 The P-51 Mustang is one of the best fighters of all time, and although it was an American aircraft, it owes a lot to Great Britain for its genesis. In 1940, the British Purchasing Committee requested North American Aviation (NAA) to build the Curtiss P-40 for the RAF. NAA president, James Kindelberger, offered the British the development of a much better plane instead. The British agreed, and the team led by chief designer Edward Schmued, who was a German immigrant with Austrian roots, went to work. The preliminary design was approved on May 4th, 1940, final assembly and engine installation began on September 9th (just 127 days after approval), and the first flight of the NA-73X prototype followed on October 26th.

The Allison V-1710-39 liquid cooled in-line engine, rated at 1,100hp, was chosen for the new fighter and the designers did their best to create as narrow and sleek a fuselage as possible to lower drag. For this same reason, they decided to use an innovative laminar flow airfoil, which lowered drag, but, on the other hand, required a smooth surface. That necessitated puttying and sanding the leading areas of the wing. Another design novelty was the radiator below the fuselage. Armament consisted of two guns in the nose and four in the wings, all of which were .50 caliber Brownings (the Mk.Ia variant had four 20mm cannons). The British chose the name Mustang for the new aircraft, later adopted by the US as well. The RAF received its first Mustang Mk.Is in October 1941. The performance was found to be satisfactory, as the Mustang was faster than the Spitfire Mk.V and had more than double the range. However, the Allison engine achieved its maximum power at only 11,800ft (3597m) because of its single stage supercharger. Above this level, engine performance decreased rapidly. Since air combat occurred at higher altitudes, the RAF decided to use their Mustangs in the reconnaissance role. The US Army Air Corps, interested in the new type as well (but contractually bound to P-40, P-39 and P-38 interceptors), asked NAAto convert the Mustang to a dive bomber with wing mounted dive brakes (the A-36 variant).

To solve the high altitude weakness, work had begun in Britain to outfit the Mustang with the turbocharged Merlin engine. Trials of the Mustang X prototype indicated a level speed of 433mph (697km/h) at 22,000ft (6700m), 100mph (161km/h) faster than the Mustang Mk.I. As it was obvious this was the way to further develop the Mustang, NAAcontinued further work, using the Packard V-1650-1 (a license built Merlin 61). Since the Packard unit sported some design changes, it was no longer possible to fit the original Merlin. The need for an intercooler for the two stage supercharger required a larger radiator duct. Another change brought about the removal of the fuselage guns. Production started at the Inglewood plant of the P-51B in May and at a new assembly line at NAA Dallas of the P-51C in August 1943. Supplies to the RAF continued as the Mustang Mk.III. After just a handful of the new Mustangs were produced, then commander of US Air Forces in Europe, General Henry Arnold, requested even greater range. NAA responded with the additional an 85gallon fuel tank installed behind the pilot's seat.
The P-51B/C were great fighters but lacked rearward visibility and suffered from gun jamming. The RAF found a partial solution to the visibility issue with the introduction of the 'Malcolm Hood' semi-bubble canopy, but the design team at NAA decided to rework the Mustang yet again. The main change was the introduction of a bubble canopy with a lowered rear fuselage. The wing was reworked to accommodate six .50 cal guns and a new arrangement of the ammunition chutes eliminated the jamming problem. Together with some other changes, the new P-51D, the ‘Definitive’ Mustang, was born at the end of 1943 and production started at both the Inglewood (with -NAsuffixed serials) and Dallas (-NT) plants. Due to the short supply of the Hamilton Standard alloy propellers used on Merlin powered P-51s, the Dallas Factory was fitting their Mustangs with steel Aeroproduct units with hollow blades as on the P-51K.
The P-51D/K became a true ruler of the skies, serving as an escort and patrol fighter and also in the ground attack and reconnaissance roles (F-6 conversion). In total, 8,102 P-51Ds and 1,500 of P-51Ks were produced. The Mustang stayed operational after the War and served in the intercept and attack roles even as late as the Korean War. The last P-51 was retired from USAF service in 1978, while in foreign service, it was operational until 1984 (Dominican Republic). Some 55 nations used the Mustang.

The first Mustang air victory was achieved on August 19th, 1942, when Flight Officer Hills shot down an Fw 190. It was the beginning of the incredible tally of 4,950 enemy aircraft shot down by Mustang pilots during World War II. Of them, 251 achieved ace status. The most successful P-51 pilot was George Preddy Jr., recording 24 of his 27 aerial victories flying the Mustang, followed by John C. Meyer and John J. Voll with 21 kills. Charles Yeager, famously the first man to break the sound barrier (1947), was the first P-51D pilot to became an 'ace in a day', after recording five kills on October 12th, 1944.

After solving the longitudinal stability problems of the early P-51D-5 series with the addition of a dorsal fin extension, the P-51D-20 series also received a new K-14 gyroscopic gunsight, replacing the older N-9 reflector type unit. In the Dash 20 series, the elevators became aluminium covered as opposed to fabric (from February 1945). During production, the battery moved from the rear of the cockpit to the nose, making room for the IFF (Identification Friend or Foe) system. Starting with the 20th series, the wings were fitted with attachment points for various types of rockets and rocket for extra ground attack punch.