News October 2021 products were just added into our online Store. See the complete list under this link. 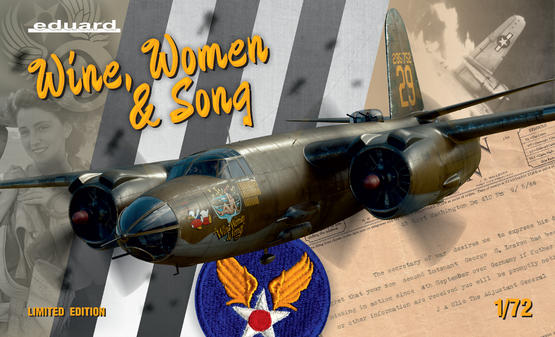 In the box are machines from the MTO and ETO.

The 320th BG was formed on June 19th, 1942 at MacDill, in Florida, equipped with the B-26 Marauder. At the end of 1942, the entire 320th Bombardment Group was transferred to Algeria, ground personnel arriving by sea while flight personnel flew their aircraft in over the south Atlantic to Africa. After the occupation of the territory, operations were switched over to Sicily and Italy.The units gradually left their Algerian bases, and from November 1943, they flew just shy of a full year from the former Italian base at Decimomannu in Sardinia. This aircraft, named ‚Wine Women & Song‘, was adorned with noseart depicting a nude woman in a glass, and the unit marking consisting of Donald Duck holding a bomb in his hand. A standard USAAF camouflage scheme of Olive Drab on the upper surfaces with supplemental fields of medium green on the wings and tail surfaces was carried. The bottom surfaces were painted Neutral Grey. The yellow band forward of the rear gun position was the 320th BG, 42nd BW identifier.

Over the course of the Second World War, employees of the railroad company New York Central accumulated the funds required to purchase two aircraft for the United States Army Air Force. One was a bomber christened New York Central II, and was handed over to the USAAF in September 1943. During its career with the 17th BG, it flew 103 missions (the first of which was a support mission for the battle at Monte Cassino, the last being a raid on Winnweiler in Germany) before being brought down by flak on January 1st, 1945. The crew perished, with the exception of two gunners who survived and sat out the remainder of the war in a POW camp. The airplane dropped 322,000 pounds of bombs during its combat career.

This aircraft is not only interesting for its artistically applied noseart of a nude young lady, applied by the plane’s pilot, Jack Havener, to the nose of 42-95952, but also for the fact that it was actually made up of two aircraft. The data placards on the nose carry the serial number 42-95952, while the serial on the tail bore the number 295938. The camouflage scheme consisted of the standard Olive Drab/Medium Green/Neutral Grey, and invasion stripes were carried on the wings and fuselage.

Same as the aircraft depicted on page 14 from the same unit, Jack Havener was entrusted with the artistic application of noseart depicting a nude woman with the name Valkyrie. Fate would prove a harsh mistress for the aircraft flown by Lt. Witherbee, later handed over to the crew led by Lt. Bernard, on January 28th, 1945, when engine failure forced the pilot to try and return back to Cormeilles-en-Vexin. The resulting crash had no survivors.

The 344th Bombardment Group was established in September, 1942 at MacDill in Florida, and was equipped with the B-26 Marauder. After being relocated to the base at Stansted in United Kingdom as a component unit of the 9th Air Force, missions were conducted against military targets and the transportation network in German occupied France, the Netherlands and Belgium from February 1944. One of the aircraft of the component 597th Bombardment Squadron was this aircraft, once again, one that was decorated with noseart of a scantily clad woman, courtesy of Jack Havener. This Marauder, originally delivered in natural metal, was subsequently camouflaged in Olive Drab on the upper and side surfaces, and photographs indicated peeling of the paint. At this time, the codes were applied in grey.

Ish Tak Ha Ba (Dakota language meaning ‚Sleepy Eye‘) was named by the aircraft’s captain, Joseph E. Farrell, and he also had the head of an Indian Chief painted on the airplane’s nose. Joseph Farrell hailed from the small town of Sleepy Eye, and he joined the USAAC after the beginning of the war. He underwent pilot training, after which he was assigned to the 584th BS, a unit equipped with the Marauder. After being relocated to Europe, Joseph Farrell flew a total of 67 combat missions before the end of the war. In September 1945, he joined Northwest Airlines, where he flew until he was sixty, and even after retirement, he never left flying.

The beginnings of the 397th Bombardment Group hails back to April 20th, 1943, at MacDill in Florida, where the unit began to train on the B-26 Marauder. After relocating to Great Britain, the first combat mission was an attack on a V-1 base in the vicinity of Pas de Calais, exactly a year after the formation of the unit. Natural metal aircraft of the 397th BG carried markings that included a yellow diagonal band across the vertical tail surfaces. At the time of the invasion, the so-called D-Day stripes were added to the fuselage and wings. Unit members added a silhouette of the United States on the nose of this aircraft, along with a well endowed lady with the inscription THE MILK RUN SPECIAL. Bomb silhouettes symbolized the number of bombing missions.

Another aircraft to be decorated with noseart of a scantily clad woman was this one, named Miss Arkansas, and it carried a sharkmouth to boot. She served with the 444th Bombardment Squadron / 320th BG at the Sardinia base of Decimomannu. From here, the 320th BG conducted raids against targets in central and northern Italy, southern France and southern Germany. By this time, delivered aircraft were no longer in camouflage colours, but rather in natural metal. Only the forward fuselage ahead of the cockpit was in Olive to prevent glare from the reflection of the sun’s rays.

Brassin - resin & photo-etched accessories for scale plastic kits.
For kit: EDUARD, TRUMPETER
Write Product Review
You have to be logged in to write a review. No review available for this item.
Top of page