News December 2021 products were just added into our online Store. See the complete list under this link. 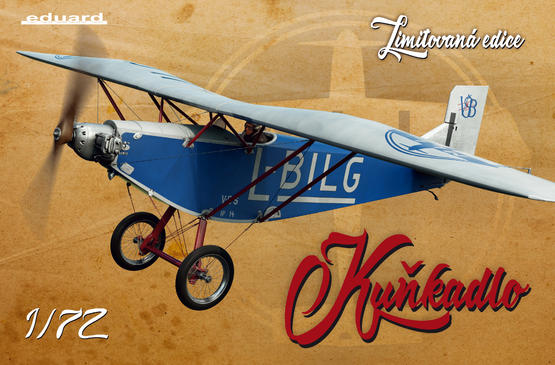 Only one piece was build. Now in Technicke museum in Prague. In 1/72 scale.

Construction of the Kunkadlo was begun by the brothers Bohuslav and Vladimir Simunek in 1926. The aircraft was completed and flown a year later. The initial flight was conducted by Major Skala, who would become known as a member of a later long distance flight from Prague to Tokyo. After the first flight, the wing position was changed in that it was raised above the fuselage and moved slightly aft. Vladimir Simunek took part in several air shows with this sport plane. The flying career of this noteworthy and unique aircraft ended in 1930, when issues began to arise with its glued construction. The airplane was restored in 1967, with the brothers themselves acting as advisers. After the restoration was complete, the aircraft was hung in the Technical Museum in Prague, where it is displayed to this day.

Masking sheet - die-cut adhesive shapes.
For kit: TAMIYA
Write Product Review
You have to be logged in to write a review. No review available for this item.
Top of page