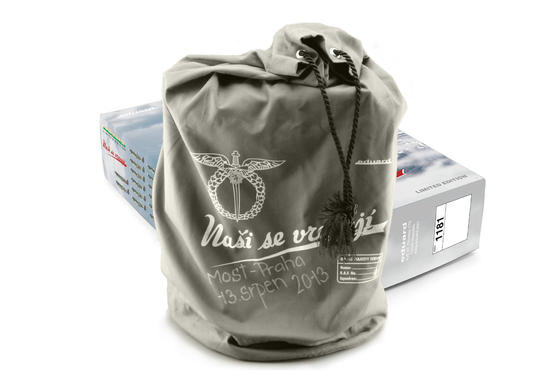 Complete set with the RAF style bag, which took the commemorative flight Aboard of an An-2 aircraft from Most to Prague-Kbely airport , during our “The boys are back” event on the 13th of August 2013.

A limited edition scale kit of Spitfire Mk.IX in the scale 1/48 “Nasi se vraceji” ('The Boys are Back'), which is a tribute to the Czechoslovak pilots and their Spitfires for their service in the RAF during the World War II.

The edition includes moldings for making of two kits and will include three types of wings: for Mk.IXc early, Mk.IXc late and Mk.IXe.

The part of the limited Eduard edition are like always photo-etched accessories and protective masks.


In a very unusual way are addressed the camouflage schemes for the selected 38 planes. This is done in a form of a historical publication, whose author Zdenek Hurt is an expert on the Czechoslovak Spitfires, and on the fate of the Czechoslovak Airmen in England.

Part of this exclusive limited edition will the limited issue of postage stamps (Czech Post) with the theme „Naší se vraceji“ ('The Boys are Back'), which will be affixed to the mail envelope on the first day of issue and officially stamped with a commemorative postal stamp. This combination will not be available otherwise, than as part of this series!

Scale plastic kit.
Write Product Review
You have to be logged in to write a review.

Limited Edition packaging along with the stunning box art, was just a taste of what was inside the box.
Multi Optional decal schemes. Loads of Extras.
Build or stash ?
A true modern day collectable.
It was just like Christmas all over again when the postman arrived.