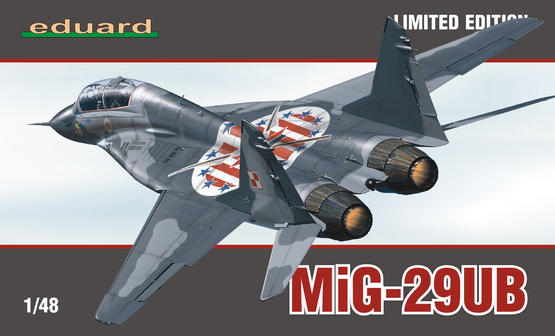 The roots of the MiG-29 can be traced back to the end of the sixties and beginning of the seventies. At that time, information had leaked out that the United States was working on the F-X program, from which emerged the F-15 Eagle. The Soviet Union, obviously, could not be left behind in the arms race, and the General Staff formulated requirements for the Perspektivniy frontovoy istrebitel (PFI - Advanced Frontal Fighter Aircraft). It was to have the ability to take off from small, unprepared fields, have a useful combat radius, excellent turn around time and be able to carry a varied payload. The speed of the machine was to be in excess of Mach 2.

Aerodynamic study was passed to TsAGI in co-operation with OKB Sukhoi. It became clear that the best route to take would include two roads. As a result, the PFI program was expanded to also include the PLFI (Advanced Light Frontal Fighter Aircraft), which was to result in the Soviet answer to the F-16 Fighting Falcon lightweight fighter. The plans assumed that the Soviet air force would be composed of one-third PFI aircraft, and two-thirds PLFI, and as such would find its adversary to be mainly the F-16 and the YF-17 (which evolved into the F/A-18). The PFI program with Sukhoi led to the Su-27. The PLFI was entrusted to the Mikoyan bureau. Work on the latter type, under the factory designation ‘Izdelye’ 9 began in 1974, and three years later, on October 6, 1977, the aircraft first took to the air. The program suffered setbacks thanks to the loss of two prototypes, due to problems traced back to the engines. In 1984, air force tests were concluded, and thanks to positive results, the first production machines began to reach Soviet frontal fighter units. These new aircraft began to replace the MiG-23. In keeping with the requirements, the aircraft could lift off from unprepared strips. Auxiliary air intakes on top of the blended fuselage/wing structure provided air on the ground, allowing the regular intakes to close and prevent FOD. The existence of the new fighter was discovered by NATO very early after the program began, and the ASCC allocated the name Fulcrum ‘A’. Besides the base version of the MiG-29 (Izdelyie 9-12), there was also the MiG-29B, an export version intended for countries outside of the Warsaw Pact. Training was carried out on a two-seat version, the MiG-29UB (Izdelyie 9-51), which carried the NATO codename Fulcrum ‘B’.

Further development and production was impacted by the fall of the communist block, and the inevitable economic collapse of the Soviet Union and its consequent splitting up of state assets with varying degrees of dependence on Russia.

Production also came for the MiG-29K and MiG-29SMT (both coded Fulcrum ‘D’). The MiG-29K is a navalized variant and besides with the country of origin, it also flies with the Indian Navy. The intended role is that of carrier fighter for the ‘Vikramaditya’ (formerly the Soviet carrier ‘Admiral Gorshkov’). The SMT is a modernized variant of the MiG-29.

Color photo-etched accessories.
For kit: REVELL
Write Product Review
You have to be logged in to write a review. No review available for this item.
Top of page